Dominic Raab MP writes to Secretary of State for Education 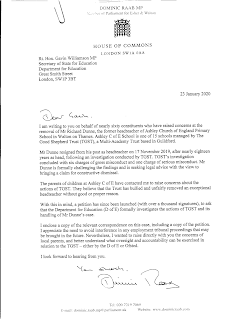 The MP for Esher and Walton, Dominic Raab (also the Foreign Secretary) wrote to his cabinet colleague Gavin Williamson, the Secretary of State for Education. on 23 Jan 2020, about the situation at Ashley School.

He wanted to "better understand what oversight and accountability can be exercised in relation to TGST" - ie the Good Shepherd Trust, which owns and runs Ashley School.

Mr Raab also cites the accusations of bullying, the concerns of local parents and the petition launched by Ashley Parents Lou and Tom Bradley.

Here it is the letter in full:

I am writing to you on behalf of nearly sixty constituents who have raised concerns at the removal of Mr Richard Dunne, the former headteacher of Ashley Church of England Primary
School in Walton on Thames. Ashley C of E School is one of 15 schools managed by The Good Shepherd Trust (TGST), a Multi-Academy Trust based in Guildford.

Mr Dunne resigned from his post as headteacher on 17 November 2019, after nearly eighteen
years as head, following an investigation conducted by TGST. TGST’s investigation
concluded with six charges of gross misconduct and one charge of serious misconduct. Mr
Dunne is formally challenging the findings and is seeking legal advice with the view to
bringing a claim for constructive dismissal.

The parents of children at Ashley C of E have contacted me to raise concerns about the
actions of TGST. They believe that the Trust has bullied and unfairly removed an exceptional
headteacher without good or proper reason.

With this in mind, a petition has since been launched (with over a thousand signatures), to ask
that the Department for Education (D of E) formally investigates the actions of TGST and its
handling of Mr Dunne’s case.

I enclose a copy of the relevant correspondence on this case, including a copy of the petition.
I appreciate the need to avoid interference in any employment tribunal proceedings that may
be brought in the future. Nevertheless, I wanted to raise directly with you the concerns of
local parents, and better understand what oversight and accountability can be exercised in
relation to the TGST - either by the D of E or Ofsted.

I look forward to hearing from you.

For more context, you can read the allegations made against Mr Dunne (and his rebuttal) here.

This is the petition referred to in Mr Raab's letter.

Here is a detailed timeline of events.