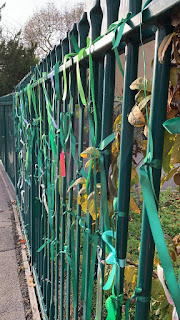 The coffee mornings held before half term by Ashley interim head teacher Mr Clark have (according to some of the people I've spoken to) been useful. In them, Mr Clark made several assertions which were controversial, to say the least.

His ill-conceived "gotcha" on the school canteen's organic food content has already been cited in the resignation statement of Georgia Bailey, the Ashley school caterer.

The idea - first stated in Spring Term newsletter 4 - that 101 responses to the Ashley parents survey represented a quarter of families is just bad maths.

(It might represent a quarter of all families, but it could represent just over an eighth. The actual figure is likely somewhere in-between, depending on how many parents/carers from the same family completed a questionnaire).

Another statement which seemed to animate parents at the coffee mornings was the assertion that with Mr Dunne's curriculum, Ashley children were not being properly prepared for secondary school.

This has aroused strong feelings among parents whose children have been through Ashley school. It moved Laura Sutton to write the following letter to Mr Clark. She has kindly given me permission to reproduce it:

I’ve been thinking a lot about what was discussed at the coffee morning last week.

One thing that has really resonated is the point about the children missing parts of curriculum and not reaching their potential consequently.

Therefore, that is under review and the curriculum recommended by you is to be more closely aligned to the national curriculum benchmarks. Presumably this is to address some missing elements that are causing you grave concern for the future of Ashley children.

I have two children who have left Ashley. They are twins in year 8.

My daughter, who was never a high flyer at Ashley - but steady, shy and sponge-like - is in all the top sets at her outstanding secondary school. She received a letter last week congratulating her on being in the top 10 girls in a 110-strong female pool for effort, attention and high performance.

My son, who has a one-on-one, as he did at Ashley, is in sets 3 out of 4. He has difficult challenges but passed his year 6 Sats in 2017 and is thriving at secondary well above expectations. He’s also dearly respected for being a kind and responsible boy with huge charm. He’s changing people’s perceptions about disability.

The education and gentle care they both received at Ashley may not tick every national curriculum box. But it ticked very many other boxes that have made them both into very successful young seniors against their peer groups.

I know countless families where their Ashley children have completely smashed it at Secondary against their ‘full national curriculum’ counterpart peers. I think it is really important that this is given proper weight and not lost in the current reassessment.

A more homogenous education that ticks boxes is no replacement for the unique education our children have had at Ashley under Richard Dunne’s vision.

I think we are all sadly getting used to him being gone permanently. But it was hugely disappointing to hear you talk of how poorly the school has been educating our children when so many of us know that this is not true. I just do not accept this.

Our eldest kids have left Ashley as ‘middle of the roaders’ who are still streets ahead of peer school leavers whose schools follow process in the way I fear Ashley will do so now. A huge mistake in my opinion.

I have one child left at Ashley. He is bright and doing well. I’m sure he’ll help your league tables in a greater way than the twins did. But they all share great qualities, and these qualities are what will be their making - and are what are most important to us. Some are down to parenting. Many are down to their schooling at Ashley.

Dry national curriculum teaching will not produce these qualities. Diverse and wide personal development - along with a sound all-round academic education - is what makes a great school environment.

Please do not underestimate or undermine the quality of education that Ashley has been providing for many years. I am seriously saddened that this is not being understood by the GST and possibly now by you.

No institution is perfect. But Ashley has been an exceptional school on many levels for many years. The leavers prove this over and over, year after year. Spreadsheets don’t qualitatively assess this.

If you were to solicit feedback from other parents whose children have recently left Ashley, I expect 90% would say the same as I have. Surely this is one of the most important factors to take into consideration when reviewing the school’s success or otherwise?

Harmony, eco, a kind and an emotionally motivating/nurturing environment is what works above all other local schools - by a country mile. Ordinary schools that follow process fall well short.

I have seen Mr Clark's response to Laura's letter. He acknowledges, but chooses not to address her points.
at 1:13 pm