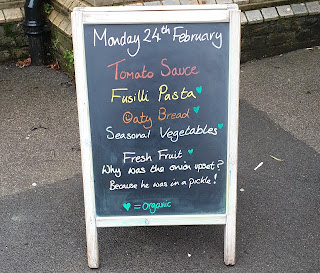 Well this is very sad. I got the following yesterday from Georgia Bailey. I asked Georgia if she minded if I published it. She told me that's why she sent it.

Georgia works in the school kitchen for the company which supplies Ashley school's food:


"It is with so much regret that I have resigned as caterer of Ashley. I took the post to work alongside an inspirational head teacher, to push the boundaries of how good school food could be.

Over the last few years we have been able to bring the percentage of fresh, seasonal, organic food to a level I would not have thought possible. This has taken hard work and dedication from a lot of people behind the scenes… I think we’re on our fifth greengrocer.

However since Richard Dunne was forced to resign it has become clear that there is no longer the interest in maintaining our exceptional service. I have been told that we were deliberately misleading parents about the percentage of organics. This is simply not true.

I have been told not to engage directly with parents, something that was previously encouraged.

It seems that everything that Richard did to make Ashley such a unique school is being swept away.

I feel that I have to stand up and be counted and I hope to continue to support Richard Dunne and his family, and the wider school community in seeking an independent inquiry into what has led to this.

It has been my honour to feed Ashley’s children and staff and work with a team of people, both inside and outside the kitchen, who have been dedicated to the Harmony Project.

I have asked Alex Clark and the Good Shepherd Trust for comment. I will post any response here.