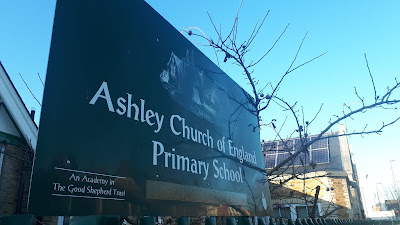 On Sunday I wrote to Paul Kennedy, chief executive of the Good Shepherd Trust, about the appointment of Jennie Ratcliff as the new head teacher of Ashley School, specifically to get a comment on the assertion by outgoing parent governor Karola Zakrzewska that the GST's own rules in appointing Ms Ratcliff were not followed.

In a statement on Friday, Ms Zakrzewska said:

"No LGC [Local Governing Committee] member was part of the hiring process for Mrs Ratcliff. For previous candidates interviewed for the role, a member of the LGC was included in those interviews. And as per the Scheme Of Delegation, there should have been a member of the LGC as “a representative on the appointment panel".”

Ms Ratcliff is currently the head teacher at Surrey Hills All Saints Primary, an inadequate one-form entry school in Westcott, also run by the GST.

I cc'd the current interim head teacher at Ashley school, Alex Clark, in my letter to Mr Kennedy. Mr Clark has kindly written me a response on behalf of the GST.

Firstly, he notes he is: "disappointed that information confidential to the LGC has been shared by an ex-LGC member", suggesting Ms Zakrzewska has broken the code of conduct she signed up to when she became a parent governor.

On the specific issue of whether or not the rules were broken in the appointment of Ms Ratcliff, Mr Clark says:

"As headteachers are appointed by the Trust, Mrs Ratcliff is already in that position and so a full recruitment process was not necessary."

"Mrs Ratcliff’s appointment was made in the best intentions and followed all guidelines."

On the unfortunate timing of the announcement (4 Jan), Mr Clark says:

"We were ready to make the announcement at the end of term in December but did not want to be accused of doing it as we went into the holiday period. We therefore agreed that the announcement would be on the first day back in January. Unfortunately, this coincided with the announcement of another national lockdown. We understand that it is a stressful time for everyone and we in no way wanted to cause any additional pressure."

On Ms Ratcliff's suitability for the post, Mr Clark says:

"I am thrilled that Ashley, its pupils and its staff are going to be in the safe hands of an experienced and well-respected GST headteacher going forward. I now ask that we can... allow Mrs Ratcliff the opportunity to do her job and lead Ashley with the fantastic leadership that she has demonstrated throughout her career."

Ms Ratcliff will take up her role at Ashley from 19 April, and Mr Clark will move to his role as Regional Director of Education at the GST, where he tells me he will be supporting Ashley as one of his schools going forward.

I am grateful to Mr Clark for his response. To read his email in full, please click here.

To get to grips with this story from the beginning, try the Start Here or About sections, or dive straight into the timeline.